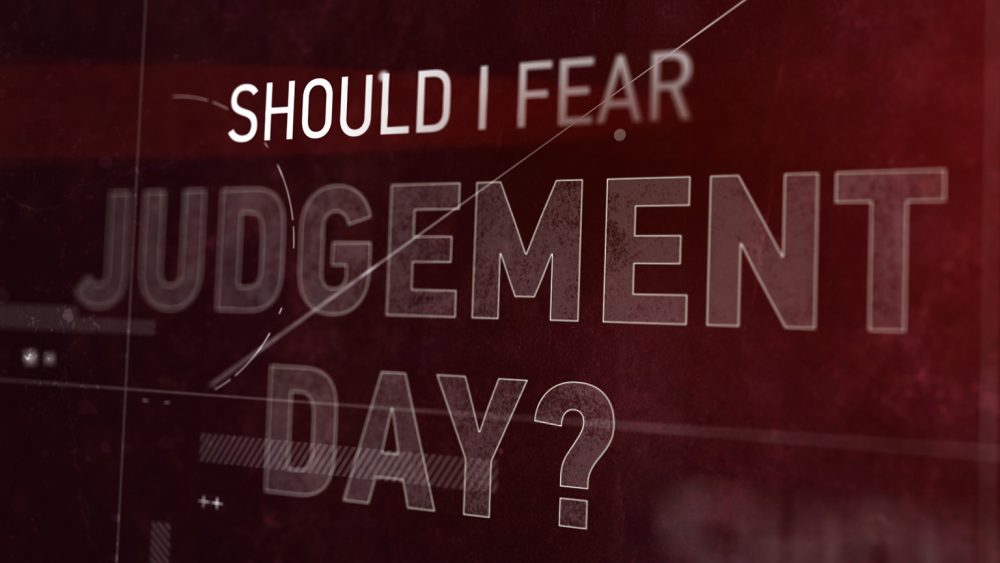 As daunting as Judgement Day may feel, we believe the Judgement is actually good news. Here’s why.

As I looked, thrones were set in place, and the Ancient of Days took his seat. His clothing was as white as snow; the hair of his head was white like wool. His throne was flaming with fire, and its wheels were all ablaze. A river of fire was flowing, coming out from before him. Thousands upon thousands attended him, ten thousand times ten thousand stood before him. The court [or judgment] was seated, and the books were opened.

This verse creates a frightening image. And I’m sure that the picture described doesn’t even begin to do justice to the “Ancient of Days”.

Revelation 20:11 (NIV) has a parallel description of the judgment, which makes it clear just how fearsome this event will be:

Then I saw a great white throne and him who was seated on it. The earth and the heavens fled from his presence, and there was no place for them.

So why shouldn’t I be fearful of judgement day?
Before I get to that, I need to make it clear that the coming judgment is not good news to all. There are good reasons why the notion of a ‘day of reckoning’—when all accounts will be settled—is feared by so many.

First, the God of the Universe who will preside at this judgment is a Being of unlimited power. Theologians use the Latin-derived term omnipotence (‘omni’ meaning ‘all’ and ‘potence’ referring to His ‘power’) to describe this attribute of God. He has the power over life, death and eternity, and this is the day when He will use that power to punish every sin.

Second, unlike human judges who must always make do with limited and incomplete information, the Divine Judge has unlimited knowledge. This is referred to as God’s omniscience (‘omni’ meaning ‘all’ and ‘scientia’ meaning ‘knowledge’). If you actually dwell on this attribute—that there is not a single fact, occurrence, thought or deed (past, present or future) that God does not know and see—it is probably the scarier of the two!

For many, the fear of exposure is greater than the fear of punishment. I’m not sure where I got this mental picture from, but I remember hearing somewhere that at the Last Judgment, all of the events of my life would be played on a huge movie screen for all to see. Scripture goes almost as far, describing the ‘books’ that are to be opened that will reveal every detail of every life that has been recorded. Make no mistake, this judgment is coming. It will be very public, very scary and very final.

It’s not all bad news though. This is also a day when every wrong will be put right. Think about it. God’s punishment of sin is a fearful prospect from the point of view of the sinner, but every sin has a human victim, and from the perspective of those who have been sinned against, this day will have been long-awaited.

Finally, justice will be served on the perpetrators of every wrongdoing and criminal offence. Every time a powerless victim cried out to God for justice; every time dispossessed people raged against their oppressors to no avail; every time a little child’s pleas for mercy fell on deaf ears, God was watching, God was listening and God will make it right. This is the Day about which Romans 12:19 is written:

Do not take revenge, my dear friends, but leave room for God’s wrath, for it is written: “It is mine to avenge; I will repay,” says the Lord.

And to the many who (sometimes quite rightly) think that “life isn’t fair,” this is good news indeed.

The best news is yet to come. You don’t even have to appear at this judgment. Jesus will appear for you—if you let Him. You see, when that great and terrible Judgment begins, as Daniel tells us, the books of record will be opened. But Revelation 20:12 speaks of another book that is also opened at this time. This is the Book of Life and if your name is found in it, the result of your case is assured. In fact, John 5:24 tells us that your case will not even be heard. In this verse, Jesus assures us that;

...whoever hears my word and believes him who sent me has eternal life and will not be judged but has crossed over from death to life.

In other words, for the person who trusts in Christ, the judgment has already taken place. It took place in Christ because He was sentenced in our place on the Cross. In the words of “The Pulpit Commentary”: “The judgment is over, the books are closed, condemnation is no longer possible.”

Therefore, there is now no condemnation for those who are in Christ Jesus,

Condemnation is a word associated conceptually (and lexically in the Greek) with judgment. It refers to an adverse judgment and the sentence of punishment that accompanies it.

You don’t even have to appear on judgment day. Jesus will appear for you—if you let Him. Click To Tweet

Based on these verses, I imagine a scene where God almighty sits on the great white throne (as in Revelation 20; Daniel tells us only that it is on fire) at the final judgment. On the table in front of Him are the books of record, but beside them, lies open, the Book of Life. As each name is read out, it is cross-checked against this Book. If a person’s name is found there, the case is dismissed. And guess who is there doing the cross-checking? Jesus Himself. After all, Rev 21:27 refers to this as “The Lamb’s Book of Life.” As the “advocate with the Father” (1 John 2:1) Jesus actually attends the court in our place —not to plead our case— but simply to remind the court that the case has already been heard and decided in our favour. That, after all, is what justification means. We have been found “not guilty” because of Christ’s sacrifice for us on the cross.

We have been found “not guilty” because of Christ’s sacrifice for us on the cross. Click To Tweet

Let me be clear. If you have placed your trust in Christ, your case has already been heard. Beside your name in the great books of record then, will be written this simple summary of the case: “Not guilty. Covered by Christ’s righteousness.”

If you have placed your trust in Christ, your case has already been heard. Beside your name in the great books of record then, will be written this simple summary of the case: "Not guilty. Covered by Christ’s righteousness." Click To Tweet

That is why believers in Christ should not fear the final judgment. We do not need to appear before the court because the outcome has already been decided. Of course, there is a “judgment” of sorts at which we will appear, but this is the Judgment of Rewards, which, as Christians, we may eagerly anticipate rather than fear.

If you would like to make a decision to follow Jesus and accept Him into your life, we would love to stand with you on this journey! Head to I Have Decided To Follow Jesus to find out more.