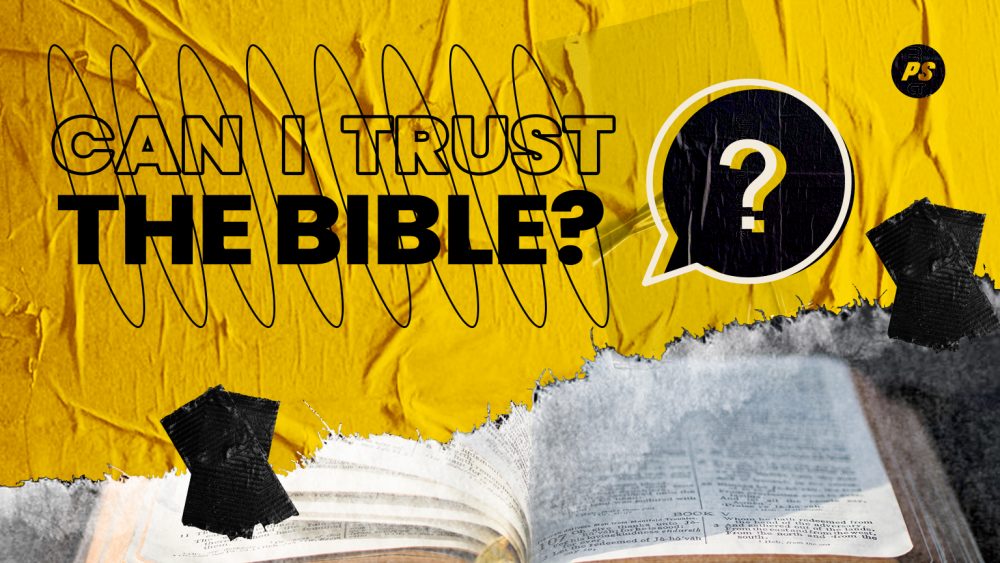 Can I Trust The Bible?

Trust in the Lord with all your heart, and do not lean on your own understanding. In all your ways acknowledge him, and he will make straight your paths.”

Faith leads to seeking which leads to understanding: This is the premise for our ongoing spiritual growth as Christians and what our response to God’s leading should be. Click To Tweet

Faith leads to seeking which leads to understanding: This is the premise for our ongoing spiritual growth as Christians and what our response to God’s leading should be.

In any communication that we have with one another, it is always vital to ensure that there is mutual understanding of what we mean by our words. Therefore, when it comes to the concept of trust, we must begin by seeking to understand its true meaning in order to draw accurate conclusions regarding biblical truth.

So what does it mean to trust? Trust means to accept, believe and put faith in the words, actions, character and virtue of the one you are listening to and obeying. Children instinctively put their trust in their parents to make decisions for them that will be in their best interest. We see our parents as role models and mimic their behaviour, according to how they are raising us. In the same way, we as Christians should seek to become more like Jesus Christ, drawing upon and mimicking His wisdom, words, actions and lifestyle in order to become examples of what God intended for us to be as His children—spiritually and physically free from bondage, and restored, revived and renewed in our relationship with God and those around us.

It is important that we also seek to understand what we believe, even though faith always comes first. Click To Tweet

It is important that we also seek to understand what we believe, even though faith always comes first. You may ask yourself, why should I trust YOUR thoughts on the Bible? The answer to this question is simply, don’t. By all means, do your own research, read the Bible, read about the Bible and discover for yourself that it contains the keys to living ‘life and life to the full’ (John 10:10)

In order to be convinced of the Bible’s trustworthiness, we must delve a little deeper into how it came about, more specifically, how the various books were accepted into what we call today—the Canon of Scripture.

2. Trusting Does not Mean Blindly Accepting.

During the time of the Early Church, there were plenty of letters circulating amongst the Christian community and many wondered which ones were inspired by God and which ones were not. As such, the following criteria were established to determine whether or not each letter would become part of the New Testament Canon. Any that did not adhere to ALL of the criteria were not considered to be “God-inspired’ and were consequently rejected as part of the official canon:

Criteria 1: Must be written by a prophet
Criteria 2: Must be confirmed by acts of God
Criteria 3: Must conform to the message of the rest of Scripture
Criteria 4: Must have the power of God behind it
Criteria 5: Must be accepted by the people of God

“Their (Biblical canon) authority derived not from their early date, nor from their role as records of revelation (important though these characteristics were), but from the fact that they were believed to be inspired by God and thus to share the nature of revelation themselves.”

Each letter was carefully scrutinised to ensure its rightful entry. As time went by, these letters were copied and passed on to other churches. A multitude of these letters and manuscripts have been found over the centuries ranging from the Dead Sea Scrolls to fragments of manuscripts. When compared to the Greek Iliad—of which there are 643 known copies gathered over 400 years since the original manuscript—over 24,000+ original biblical manuscripts and fragments have been discovered over a timespan of 50-225 years. This confirms the profound impact of the Gospel as it was circulated, in written form, amongst the various growing churches of the time.

Over 24 000+ original biblical manuscripts and fragments have been discovered over a timespan of 50 - 225 years confirming the profound impact of the Gospel as it was circulated, in written form, amongst the various growing churches of the time. Click To Tweet

The Church of Jesus Christ has been built, and continues to be built, upon the traditions and faith of those who come before us. Throughout history, there have been many who have sought to discredit Christianity by challenging the authority of the written scriptures in order to undermine the faith. However, as Christians, we do not just stand on the word of those who claim to have written the Scriptures, but on the tradition of those who came before us as testimony that what is written is true and not just a fabrication.

When we look to some of the early church fathers who were closer to the action, we can see this principle: Athanasius of Alexandria recognised—at the Council of Nicaea in 325 AD—one of the earliest lists of books to be included in what today is called the New Testament Canon. Likewise, Irenaeus, who studied under Polycarp—a disciple of the apostle John himself during his time as a Bishop of Lyons, modern-day France—wrote of the Gospels as if they were already part of the canon.

Whilst this is only a small sample size, both of these great fathers of the faith trusted in the testimony that came before them and in the efficacy of the Holy Spirit to ensure that what was written about Jesus Christ was true to its fullest extent and that He was the one foretold in the Old Testament prophecies, to save and redeem humanity from sin and brokenness.

Furthermore, besides what others have mentioned about the Scriptures—both Old and New Testaments—there are plenty of archaeological digs from which artifacts have been found to corroborate the stories recorded. These include but are not limited to artifacts such as inscriptions, broken pottery and external biblical sources. One example of this is the Harbour of Corinthians. Divers have found and excavated various parts of the ancient harbour that is now underwater—a place where the Apostle Paul was reported to have frequented on his various trips.

There have been various instances where people have questioned the lack of archaeological digs to substantiate the historicity of biblical personalities such as King David and King Solomon in the Old Testament. Although they may be correct in part, it is also true that quite often, in ancient times, temples and inscriptions would be destroyed so that the materials ( iron, stone etc.,) could be re-used by their conquerors. It is also quite possible that the evidence continues to lay in wait to be discovered. These attempts to undermine the truth only add to and confirm what we already believe as Christians: Jesus Christ came to redeem us from our sins, died and rose again from the grave to defeat death and give us eternal life.

This brings us to our final point regarding our own personal testimony and how we can proclaim the name of Jesus to the world.

Just as the written biblical word (or testimony of ancient believers) has touched billions of people over time, so too can your own personal testimony.

Each one of us has a personal revelation of God’s character and of His goodness in our lives. We read stories of people like Abram, later to be known as Abraham (father of many nations), who obeyed God even when he did not know where it would lead him. Abraham trusted in the goodness of God to faithfully lead his family to their promised destiny.

I grew up in a Christian home but had many questions and never wanted to accept ‘the faith’ simply because my parents were so inclined. Over the years that I struggled and wrestled with God (just like Jacob), I came to realise that I would never have all of the answers to life. I did, however, discover through my continuing journey of seeking to understand, that it is in God that we have our being. (Acts 17:28)

The Bible is both God’s story AND our story. Each of the stories recorded are examples of how we should live out our faith “in Spirit and truth” (John 4:24) as we glorify Him in our everyday lives through our words, actions and Christlike character. Let us continue to believe, to search for truth and to seek understanding through the experiences of faith-filled men and women of God found in these God-breathed and God-inspired 66 books of the Bible. God is continuing to draw us to Him as He desires to draw near to us (James 4:8). May our testimony of God’s goodness ring true and confirm His infallible Word, for generations to come, so that it may bear fruit in drawing people to the love He possesses for all of us— no matter our past.