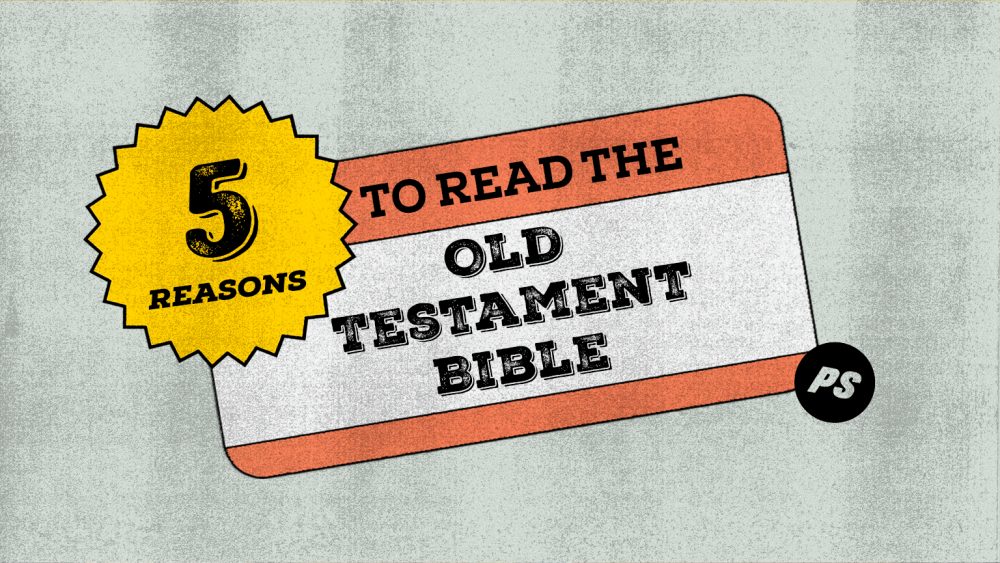 5 Reasons to Read the Old Testament

Some Christians— in identifying Jesus Christ as the focal point of biblical history— wonder why we need to read the Old Testament, mistakenly thinking that the Old Testament doesn’t talk about Him. Others find it difficult to see the relevance of the frequent genealogies documented and the stories from a culture quite distinct from their own. As we will go on to discuss, however, it is impossible to overstate the importance of the Old Testament. Just like the New Testament, it is the inspired Word of God, intended to communicate important truths and historical narratives to all generations. The more familiar we become with the Bible as a whole, the more we realise that the Old Testament is foundational to a complete understanding of the gospel message and God’s plan for humanity and the world. The Old Testament provides the illustrious and multi-dimensional backdrop for the unfolding of the story of Christ and His Church in the New Testament.

1. The Old Testament is the Inspired Word of God

First and foremost, it is important to understand that the entirety of the Bible is God’s Word— both the Old and New Testaments alike. A foundational truth for Christians is that the Bible exists to instruct and direct us. For this reason, it is vital that we do not simply handpick the passages, sections or books of the Bible that seem to resonate or encourage us the most, while neglecting or ignoring what remains. Doing this would cause us to miss crucial portions of Scripture that God intended to challenge and mould us throughout our lives.

In order to truly mature in our Christian faith and relationship with God, it is important that we are nourished by both the portions of the Bible that encourage us AND the passages that challenge and rebuke us. This is evident in an important New Testament verse— 2 Timothy 3:16— which reads: “All Scripture is inspired by God and is profitable for teaching, for rebuking, for correcting, for training in righteousness.” (CSB) Notice first that this verse begins by clearly stating that ALL Scripture is inspired by God. It goes without saying, therefore, that this includes the Old Testament. Thus, the New Testament clearly testifies that the Old has been inspired by God. In fact, the author of this particular biblical letter is Paul, who demonstrates throughout the New Testament that he has a deep understanding of the Old Testament, declaring it to be inspired, useful for teaching, rebuking, correcting and training in righteousness.

2. The Old Testament is Necessary to Understand the Gospel

The New Testament recounts the events that lie at the heart of the gospel: the death and resurrection of Christ. We see that God, Himself, came in the form of a man (John 1:1-20) to pay the price for our sin by dying in our place. He willingly received the penalty for our sin upon Himself so that we could choose to receive eternal life and be restored in relationship with Him. But where did sin originally come from? Why would God allow it to be a part of His perfect creation and what impact has it had throughout human history? This is where the Old Testament is vital to a full understanding of the gospel.

The word gospel means ‘good news’, but it is impossible to fully appreciate how good this news is without a revelation of the enormous problem that needed to be solved. The opening chapters of the book of Genesis are extremely important in this regard. Genesis 1 and 2 describe the way in which God created the world and humanity. His creation was perfect and because there was no sin, the first people walked in close unity with God. There was no pain, suffering, sickness, or death. This was and still is God’s intention for the world and for humanity. However, sadly, in Genesis 3 the first humans (Adam and Eve) were deceived by the devil and betrayed God. This is what is called original sin and this sinful nature was passed on through all generations. As a result, death, suffering and separation from God plagued humanity from that point onwards.

The prolific theologian of the early church, St. Athanasius, in his book entitled On the Incarnation (a book about the saving work of gospel), begins by dedicating a third of its content to the opening chapters of Genesis. Athanasius poses a valid question: How can we understand the work of Christ without first comprehending the need for the work of Christ? Without an understanding of these events (as well as numerous others in the Old Testament), it is impossible to fully grasp the significance of the gospel.

If one thing is clear throughout the Bible, it is that God has a plan. Click To Tweet

If one thing is clear throughout the Bible, it is that God has a plan.

As we have already seen, God made the world perfect but mankind introduced sin into that perfection. It becomes immediately clear, however, as you read on, that God always had a plan for restoration. The great hope of the Church today is that God is actively restoring the world back to how it was originally designed to be. The New Testament expresses this by prophesying that one day Christ will return and the Church will enter into the ‘New Heavens and the New Earth’. This plan is not just expressed in the New Testament, but is seen within the very same chapter in which mankind first sinned.

Genesis 3:15 prophecies that someone from Eve’s lineage (Jesus Christ) will one day defeat the devil. Likewise, in Genesis 22:18, it is prophesied that there will be One in the lineage of Abraham who will ‘bless all the nations of the earth’. In fact, scholars will generally say there are around 300-500 prophecies in the Old Testament about the coming messiah and the New Covenant He will bring. Other examples include Isaiah 53 which speaks in detail about One who will die for the sins of mankind and Joel 2 which prophesies the Day of Pentecost and the coming of the New Covenant.

When we read the Old Testament we are able to see the ‘grand scheme’ of things. We see that everything that happens throughout the Bible, happens for a reason. We are struck with a wonderfully dynamic testimony of a God who is willing to go to great lengths in order restore humanity to a close relationship with Himself.

When we read the Old Testament, we are struck with a wonderfully dynamic testimony of a God who is willing to go to great lengths in order restore humanity to a close relationship with Himself. Click To Tweet

4. The Old Testament is Necessary in Order to Understand the New Testament

Oftentimes, the New Testament’s theological truths are built upon these Old Testament references. A great example of this is Paul’s teaching, in Galatians 3, against the legalism and rejection of grace. In order to make his point, Paul uses an eloquent reference to the story of Abraham, Hagar and Sarah from the book of Genesis. He compares the birth of Ishmael (the result of human effort) to the birth of Isaac (the result of God’s promise) in order to illustrate to the people of the Galatian church that salvation is received through Christ’s work and NOT human effort .

Examples just like this frequently occur throughout the entirety of the New Testament highlighting the need for a good understanding of the Old Testament.

5. The Old Testament is Interesting

This last point may seem a little trivial, but it remains a good reason to study the Old Testament. It is worth reading simply because it is interesting.

It seems that even modern day humanity is drawn to the story of their origins!