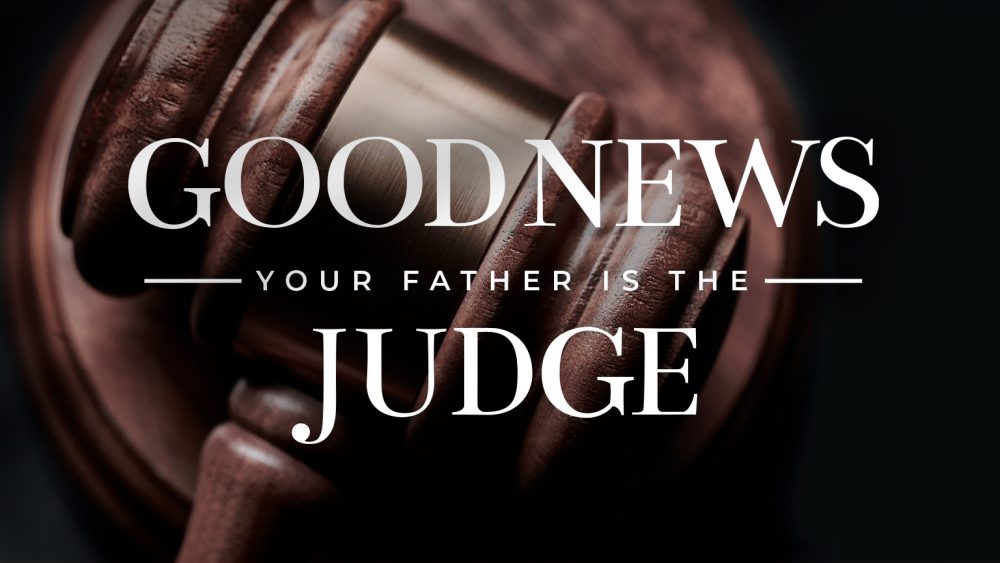 Good News - Your Father is the Judge!

In the blog, “Should I Fear Judgement Day?”, we looked at the coming Day of Judgment and why, as terrifying as it will be, Christians do not need to fear it. Nevertheless, that judgment will be terrifying for the unbeliever, not just because of the power of the Judge and the finality of the result, but because on that day, every secret will be laid bare for all to see. Everyone who is not clothed with the righteousness of Christ will appear naked, as it were, before Him: no pretence, no hiding, no excuse. A truly terrifying prospect indeed!

Let me reiterate what was said in that post. Judgment Day is not for the Christian. We have nothing to fear. Jesus, our Advocate, will appear on our behalf, bringing the Book of Life with Him to court and reminding the Judge that our case has already been heard and the irrevocable verdict of “not guilty,” pronounced over us for all eternity. However, as Christians, scripture also makes it clear that we will be judged on some things that we have done in and with our lives.

“Look, I am coming soon! My reward is with me, and I will give to each person according to what they have done.

How then is this any different from the dreaded “Great White Throne” Judgement Day that I previously described, where unbelievers will be judged on what they have done? Let me assure you, it will be as different as night and day!

To the believer, God is not a judge who deals out punishments to criminals. Rather, He is a loving Father who delights to hand out rewards to His children. In order to better understand the implications of this, I must digress for a moment and use an illustration that many parents would be familiar with.

God is a loving Father who delights to hand out rewards to His children. Click To Tweet

If you were to give a colouring book to a friend’s two-year-old child and ask them to colour in a picture, once they were done, you would probably find that it looked like a mess. The colours wouldn't match and there would be lots of scribbling outside of the lines. However, if this were your own child, you would see something very different.

You would understand that your child is only two-years-old. You would have watched them learn and develop since they could first put a crayon on paper. You would love their work! This is because you wouldn’t be focused on the mess outside of the lines and everything that went wrong or failed. You wouldn’t see what they haven’t done, but instead, what they have done! You’d admire the wonderful colours that they chose and which ones landed inside the lines. This is normal because you are their parent. A child shouldn’t fear disapproval from their parents when they bring their work for inspection. Loving parents are supportive and encouraging, and delight in seeing the results of their children’s efforts.

This is what it will be like for Christians at the Judgment of Rewards. Unfortunately, even though many live with the assurance of their salvation—that they will ultimately be found “not guilty”—many still fear being exposed at that final day of reckoning. If we’re honest, we can feel like, “Alright, it's going to be ok. It's all going to pan out in the end, but what a terrible moment when the secrets of my heart are laid bare. How ashamed I will feel, even if only for a moment.” Thankfully, this fear is misguided.

While our secrets will be revealed, we shouldn’t dread the exposure of these kinds of embarrassing and shameful secrets. No! They have been taken care of at the Cross. All of your darkest secrets, your hidden sins, your worst moments, your evil thoughts— those shameful things that only you on Earth know about— these are called forgiven sins. God has promised that when we ask Him for forgiveness, He will remove our sin from us— as far as the East is from the West. Fortunately for us, this distance is immeasurable!

As far as the east is from the west, so far has He removed our transgressions from us.

Furthermore, He has promised to forget these sins:

“I, even I, am he who blots out your transgressions, for my own sake,
and remembers your sins no more.”

“For I will forgive their wickedness and will remember their sins no more.”

God has promised that when we ask Him for forgiveness, He will remove our sin from us—as far as the East is from the West (Psalm 103:12). Click To Tweet

And it is these things, He does not forget. Nobody saw what it cost you to choose to forgive that person. God saw and Jesus tells us that “Your Father in heaven who sees what is done in secret will reward you” (Matthew 6:6b). Nobody knows what it cost you to choose to be selfless in that situation, but God was there. He saw it and He will reward you. In short, God, as your Father, does not judge you for colouring outside the lines. In the case of the picture that is our life, that is called forgiven sin and God chooses to forget all about it.

Of course, I am not at all suggesting that we should “continue in sin that grace may abound.” In the words of the Apostle Paul, “God forbid!” (Romans 6:1-2) For those of us who are yielded and repentant, and desire above all to please Him, God’s heart is not to judge us for what we haven’t done right, but for what we have done right. He does not seek to expose our dark secrets, but to reward our secret acts of righteousness.

Unfortunately, too many of us see this incredibly positive Judgment of Rewards, not as the celebration that it is, but as some kind of a balancing up of the good deeds that we have done against the bad. I need to be ruthlessly frank here. That idea is NOT Christian. God has taken care of every bad deed on the Cross so that when we repent of our sin, He is willing and able to forgive us immediately, fully, and finally. He is looking to reward us for all of our good deeds. Whatever they weigh, we will be rewarded accordingly.

God has taken care of every bad deed on the Cross so that when we repent of our sin, He is willing and able to forgive us immediately, fully, and finally. Click To Tweet
What a marvellous motivation to do that for which we were created—the “good works which God prepared in advance for us to do” (Ephesians 2:10). God is watching— not so that He may catch us out when we make a mistake (though be assured, if we are truly his children, He will certainly correct these)— but to reward us when we act righteously!