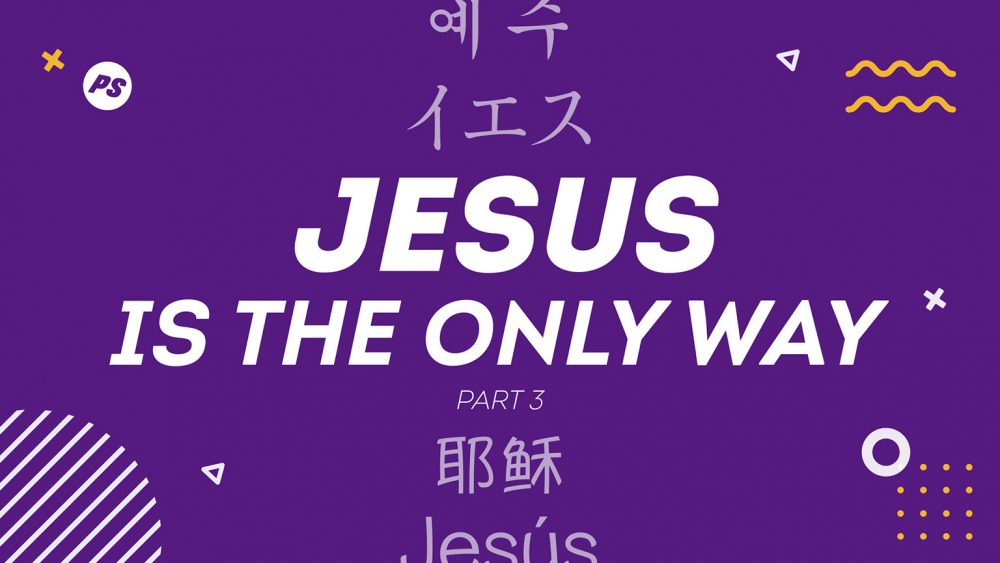 Jesus is the Only Way (Part 3)

Jesus is Life: What does that actually mean for us?

...“I am the way, the truth, and the life. No one comes to the Father except through Me.

The Raising of Lazarus by “The Resurrection and the Life”

In John 11, it tells us the story of the death and resurrection of Lazarus. Jesus had heard of Lazarus’ illness and though He was a close friend of the family, had decided to take His sweet time in making the relatively short trip to see him. Unfortunately, by the time He arrived, Lazarus had died. When Jesus finally showed up, Mary was too grieved to come and meet Him, but Martha put words to the painful thought that was weighing heavily on both of their minds and also to the hope that Martha scarcely dared acknowledge. Jesus’ response foreshadows both the miracle that was soon to come and His own glorious victory over death:

Lord,” Martha said to Jesus, “if you had been here, my brother would not have died. But I know that even now God will give you whatever you ask.” Jesus said to her, “Your brother will rise again.” Martha answered, “I know he will rise again in the resurrection at the last day.” Jesus said to her, “I am the resurrection and the life. He who believes in me will live, even though he dies; and whoever lives and believes in me will never die. Do you believe this?

Now I’ll pose this same question to you; Do you believe this?
Along with “Who do people say I am... what do you say?”(Matthew 15:13-15), here is one of the key questions of the Christian faith that Jesus asks us:

“I am the resurrection and the Life”, says Jesus. “Do you believe this?”

Most people do not have trouble believing that Jesus existed, that He was a great teacher and that He even performed miracles. These are almost-universally acknowledged facts of history. But the resurrection is a common line in the sand. The entirety of the Christian faith seems to depend on this event— a fact that the Bible readily admits. “If Christ has not been raised,” says the Apostle Paul, “our preaching is useless and so is your faith.” Indeed, “if Christ has not been raised, your faith is futile; you are still in your sins.” Moreover, “those who have fallen asleep in Christ are lost.” And to top it all off, “if only for this life we have hope in Christ, we are to be pitied more than all men.” (1 Corinthians 15:12–18).

Jesus is Life itself

Jesus asked even more of Martha than simply believing in the resurrection. The latter half of His claim was just as important; I AM the life. This claim was not only a comforting reassurance for Martha—“Yes, I could have raised him then but I’m going to do it now”—but also a powerful promise for us: “I am life Itself.” In order to fully appreciate the significance of this promise, we must realise that humanity, without Christ, is spiritually dead (and by ‘spiritually’ I don’t mean figuratively, but actually, in truth, dead). Those that are alive, apart from Christ, are only apparently alive and not truly alive. To be without Christ is to be separated from God and to be separated from God is death. Or, to state it in the positive, “to live is Christ. . .” (Philippians 1:21).

We who are in Christ have been resurrected from spiritual death and the power and life of Christ’s own resurrection courses through our veins. Click To Tweet

Jesus said, “I have come that they might have life, and have it more abundantly” (John 10:10 ). Again, there are two parts to this text, both of them powerful truths. We often focus on the second part—Jesus IS the abundant life that the Father sent Him to give us—but miss the first part: Jesus came to GIVE us life. Before I found Him, I was dead. We cannot and do not truly live apart from Him. Perhaps this is why Paul said when facing the imminent possibility of his own (physical) death, “To live is Christ, and to die is gain.”

It is His Spirit— the very same Spirit that raised Christ from the dead— who has raised us up WITH Him, to live a new life IN Him. Click To Tweet

And so the promise of coming alive and truly and abundantly living in Him, comes to those who are spiritually dead because of sin (Ephesians 2:1). God promises that “if the Spirit of Him who raised Jesus from the dead dwells in you, He who raised Christ from the dead will also give life to your mortal bodies through His Spirit who dwells in you” (Romans 8:11). We who are in Christ have been resurrected from spiritual death and the power and life of Christ’s own resurrection courses through our veins. It is His Spirit— the very same Spirit that raised Christ from the dead— who has raised us up WITH Him, to live a new life IN Him.

Friends, are you alive in Him today?