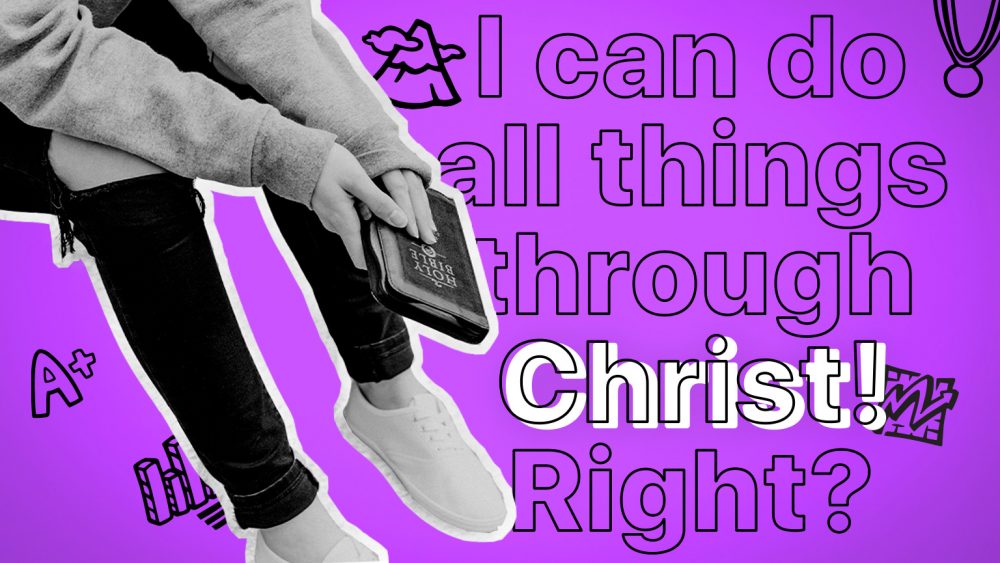 I Can Do All Things Through Christ! Right?

“I have learned the secret of being content in any and every situation… I can do all things through Christ who strengthens me.”

The latter part of this verse has been used as a motivation for Christians of all stripes, in their endeavours to accomplish all sorts of things. I am old enough to remember when boxer, Evander Holyfield, had “Php 4:13” printed on his shorts for his bout with Mike Tyson (which Holyfield won). And anyone who follows American football (and possibly many who don’t) will be aware of the name, Tim Tebow, a former professional football quarterback who lived as a very public witness for Jesus. In the NFL arena, he would display his faith in ways such as putting Scripture references to Php 4:13 on his ‘Eye Black’—a painted black line under the player’s eye which draws light away from the eyes to help them see the ball better.

I need to be clear that it is not my intention here to oppose these sorts of applications of this verse. However, I do want to highlight what this saying actually appears to mean in the context of the book of Philippians— a meaning which need not tether the Holy Spirit’s application of the verse to situations beyond its context, but must surely inform it.

Paul, the letter’s human author, is in prison—and not for the first time. In ancient times, prison did not merely entail confinement—the curtailment of certain freedoms— but also physical suffering. Since a prison sentence was considered more of actual punishment, rather than simply a protection for the rest of society, it was important that there be this component of suffering. In more extreme cases, this involved the ongoing use of torture. The place of confinement was typically (though not always) a place without natural light—at times without ANY light. Sanitation was non-existent, and in many cases, the meals and medical needs of the prisoner were not provided for. If they were to eat, or if they needed treatment of some kind, somebody outside the prison needed to provide for them. Prisoners were often chained, hand and foot, sometimes suspended from the walls, and at other times, placed in stocks (hands, feet and head placed through holes in a beam in order to keep the body in an unnatural position). In short, a normal and reasonable degree of comfort was usually impossible to achieve. The situation was calculated to produce a sense of hopelessness; to break the spirit of the prisoner. As Paul commonly refers to his ‘chains’ and ‘suffering’, we can see that this was the type of imprisonment that Paul and Silas experienced when they first went to Philippi.

When Paul says, “I can do all things through Christ who strengthens me”, he is declaring in faith that he can endure his present suffering. He has confidence that whatever befalls him, his spirit will not be broken, and that he will continue to rejoice (a keyword in Philippians) and speak of God’s goodness and grace to anyone who will listen. Even in prison. He is declaring that God’s purposes for his life are not limited, just because his physical body is confined to a dungeon. He can pray. He can rejoice. He can write. It is important to realise what Paul is applying this principle of “doing all things through Christ” to, in order to see more clearly what he is not applying it to. Obviously, the thing that Paul would have wanted most, along with any prisoner, would have been to get out of prison. But if he meant by his famous declaration, what many today take him to mean, he would not have been in that prison for more than about five minutes. “I can do all things...” would surely have extended to finding a way out of the prison, which was Paul’s most pressing human need, and one that he would have been painfully conscious of every minute of every day of his incarceration. But he does not mean that. He appeals for help to Christ’s strength, not to change his present situation as if his own comfort were the most important thing, but to endure it for God’s glory. “I can do all things,” says Paul—even this—“through Christ who strengthens me.”

When Paul says, “I can do all things through Christ who strengthens me”, he is declaring in faith that he can endure his present suffering,... his spirit will not be broken and he will continue to rejoice! Click To Tweet

Can I do all things?

So can we do all things through Christ’s strength? Yes. Absolutely. All of the things (and only those things) that Christ intends for us to do. What we cannot do is appropriate Christ’s power over all things in order to do anything that we might want to do. And what we should not do is to use Philippians 4:13 as some kind of magical incantation to be spoken over whatever difficulty we might encounter—as if God is not ok with taking us along a narrow and difficult path—and thus avoid any deeper work God may wish to do in and through us.

So I can do all things through Christ’s strength— as long as all the things that I choose to do, flow out of my cultivated intimacy with His heart, my total trust in His character and my absolute surrender to His purposes. Anything I do beyond this, I do in my own strength and that is not a place where I want to be!

I can do all things through Christ’s strength— as long as all the things that I choose to do, flow out of my cultivated intimacy with God’s heart... Anything I do beyond this, I do in my own strength. Click To Tweet