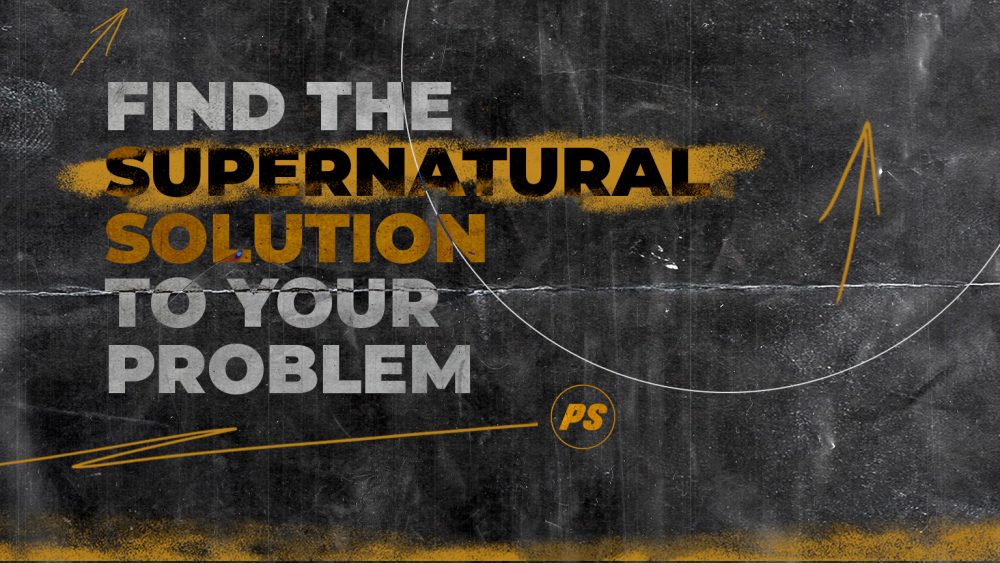 Finding the Supernatural Solution to Your Problem

Jonathan said to his young armour-bearer, “Come, let’s go over to the outpost of those uncircumcised fellows. Perhaps the Lord will act in our behalf. Nothing can hinder the Lord from saving, whether by many or by few.”

Nothing Can Hinder God…

1 Samuel 13 describes, in detail, the trouble that Israel had gotten themselves into. In the first place, their God-anointed leader, Saul, had disobeyed God’s direct instruction through Samuel, bringing judgment both on him and on the nation that he represented before God. In the second, with an army of only three thousand fighting men, Israel had managed to provoke the Philistine army, which was now making preparations to annihilate them. This army, we are told, consisted of six thousand charioteers— two to a chariot— and soldiers on foot that were “as numerous as the sand on the seashore”. But the equation only got worse.

When Israel saw the position they were in, the army went into hiding in “caves and thickets, among the rocks, and in pits and cisterns” (1 Samuel 13:6). Most simply ran away in fear. In the end, there were only 600 men left facing a foe of tens of thousands of Philistines. In the third place, only two men among those 600, carried with them, weapons of war. The oppression of the Philistines was such that Israel had been prevented from amassing the necessary arms for the battle. Things could not have gotten much worse. Indeed their situation had it not been so desperate, would have been almost comical. It could only have ended with their doom, were it not for the miraculous power of God. And yet, not even those circumstances could hinder God from what He had chosen to do!

I encourage you today to line up your own circumstances with those Israel was facing. Let faith arise. Let hope arise. Let boldness arise. If God did it then, He can do it now. Nothing can prevent God from saving because saving is essential to His character. It’s not about how big your circumstances are. It’s not even about how much God loves you (though he loves you more than you can possibly imagine). When it comes to saving, it’s about God remaining true to His character.

Despite all that had happened to Israel, Jonathan still believed that Yahweh was a God who saves. The very name of Jesus (Yeshua), upon which we call for our salvation, literally means “Yahweh saves.” Indeed this was the purpose of the mission of Jesus to the earth: to reveal God as a saviour by effecting our deliverance from the oppressive enemies of sin and death.

But notice that Jonathan’s faith, while audacious, is not presumptuous. It does not manifest as a manipulative insistence on a particular outcome. Indeed, it begins only as a flicker of hope—“perhaps the Lord will act in our behalf” (1 Samuel 14:6). Rather, his faith is manifested in patient refusal to allow the present circumstances to compromise the revelation of God as ‘deliverer’— “nothing can hinder the Lord from saving...” (1 Samuel 14:6). This is the same kind of faith that his close friend David will show, three chapters later, when he confronts the giant, Goliath. Like Jonathan, he has no way of knowing whether God would act in a particular way, at that particular time. Like Jonathan, David takes what seems to be, a reckless punt on God’s unchangeable character. Just as here with Jonathan, God responds, proving true to His character, and delivering not only David but also the nation, through him.

Light is stronger than darkness. In the same way that a little light dispels a lot of darkness, it only takes a little boldness to dispel a lot of fear. The few that were left of the army of Israel, were so afraid that they had taken to hiding in caves, pits and cisterns. Yet, as Jonathan declares his faith in God’s character, boldness takes hold. It spreads first to his armour bearer, who says in response, “Do all that you have in mind…Go ahead. I am with you heart and soul” (1 Samuel 14:7). It then spreads to the entire army who, emboldened by Jonathan’s success, join in on the pursuit.

At any point, the Philistines could have woken up to the situation and realised that logically they were the superior army. Their pursuers were far less in number and weaponless. But fear is a funny thing; a little boldness can turn the weapon of fear back on itself. Have you ever thought about that? Fear is one of our enemy’s most effective weapons. Have you ever stopped to consider why? Your enemy fears you because he knows that if you will but realise who you are—a son or daughter of the King of kings and thus invested with His full authority and resources; if you will but confess your faith in God’s unchangeable character—an all-powerful God of deliverance who cannot be hindered from delivering from our enemies; if you will but step out in obedient action, then, your enemy will be utterly defeated. All of the fear and intimidation that keeps you bound and keeps you from pursuing God’s purposes, is nothing but a con. It’s a bluff. The enemy may wish you to think of him as powerful, but he knows that we would do well to remember that he is a defeated foe. Let boldness arise!

In the same way that a little light dispels a lot of darkness, it only takes a little boldness to dispel a lot of fear. Click To Tweet

The idea was so ridiculous that it just might have come from God. But he still wasn’t sure. Jonathan’s plan was to come out of hiding and show himself to an outpost of the Philistines. If the Philistines called out to them to “come up,” that would be the sign that God would give him victory over them. But notice that if they decided to come down to him, that would have meant destruction for him and his armour bearer, since they had already given away their hiding place. In other words, once he had committed, there was no safe option. He and his armour bearer would fight for their lives, either way.

To follow the traditional route of “inquiring of the Lord” before the battle would have required alerting others to his plan, which would certainly have prevented its execution. Sometimes faith requires us to commit to a course of action and ask God to direct rather than just sitting around and asking God what to do next. Sometimes faith requires us to put ourselves in a position where God has to ‘show up’ or we’re done for.

Sometimes faith requires us to put ourselves in a position where God has to ‘show up’ or we’re done for. Click To Tweet

So, Jonathan and his armour bearer did exactly what Jonathan had suggested. They stepped out of their hiding place and challenged the enemy. From this point, there was no turning back. Their enemies called out to them to “come up”—giving the sign. With growing boldness, that’s exactly what they did. They had to climb with hands and feet to reach the Philistine outpost, which in itself would have been exhausting, and as soon as they got to the top, they had to engage in a battle where they were outnumbered by at least, ten to one. Yet, as they simply spent the energy they had, God brought a multiplication to their efforts. He supplied what they needed for the climb and for the assault—surely no small miracle in itself—but then brought a panic on the Philistines. They were in total confusion and began killing each other— another miracle. Then there was a great multiplication of the resources as the other Israelites came out of hiding and joined in the pursuit.

And so God brought about a great deliverance for Israel. It was miraculous from start to finish, but in order to accomplish it, He needed somebody to respond to Him in faith; to declare the truth of His unchanging character, and then to prove that truth by faith-filled action.