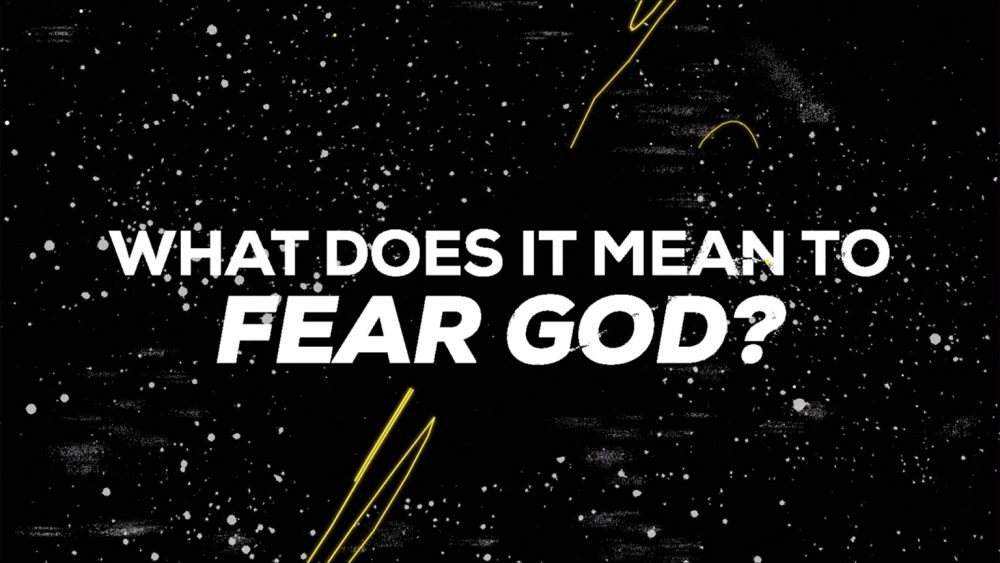 What Does It Mean to Fear God?

Finding Freedom from Fear in the Fear of God

The fear of the LORD is the beginning of knowledge; Fools despise wisdom and instruction.

When I was a kid, I read CS Lewis’ Narnia series from cover to cover many times. One of my favourite passages is the part in "The Lion, the Witch and the Wardrobe" where the children first discover that ‘Aslan,’ the king of Narnia, is actually a lion:

“Ooh,” said Susan, “I thought he was a man. Is he quite safe? I shall feel rather nervous about meeting a lion.” “That you will, dearie” said Mrs. Beaver. “And make no mistake, if there’s anyone who can appear before Aslan without their knees knocking, they’re either braver than most or else just silly.” “Then isn’t he safe?” said Lucy. “Safe?” said Mr. Beaver. “Don’t you hear what Mrs. Beaver tells you? Who said anything about safe? Of course he isn’t safe. But he’s good. He’s the king, I tell you!”

Mrs. Beaver’s wise words are a pretty good paraphrase (at least I think so) of Proverbs 1:7. It is silly not to fear God. When you consider that God created everything that is; that He is the most powerful being in the universe and that quite literally, whether we live or die depends upon His whim and pleasure, it is not difficult to see why fear is the proper disposition towards God—and indeed our only reasonable response.

But we have a problem, don’t we? Here it is, as simply as I can put it. Fear, at least as we understand it, is not a good thing. God is a good God. The question is then, Why does God want us to fear Him? This is the core of it, but there are other problems too. We know from 1 John 4:18 that “there is no fear in love; but perfect love casts out fear.” (NASB) Therefore, if love and fear are incompatible, how can God be simultaneously loving (not just ‘loving’ but Love itself) and also fear inspiring? Furthermore, I have often heard that faith is the opposite of fear. Can we then have both faith in God and fear of God? In order to understand this, we need to understand a little bit more about what fear is and how it works.

First of all, we need to distinguish between fear as an experience and fear as a belief. All of us know what it is to experience fear. It is, first of all, an emotional reaction to certain stimuli. An example that I understand well is the fear of heights. When I stand near the edge of a cliff, or even look down out of the window of a very tall building, I experience fear. For me, this goes beyond an emotional experience to a physical one. It is like a sudden churning on the inside that is often described as ‘butterflies.’ For some, this sensation can spiral out of control and lead to panic attacks. Sadly, many people experience a debilitating level of fear that prevents them from leading a normal life.

But behind the physical and emotional experience of fear, is the substance of fear. This can be described as a belief that one is subject to the power of someone or something— a circumstance or person that is either bad or unpredictable. Think about it for a moment. My cliffside experience stems from my belief that I am subject to the force of gravity and that if I were to fall, this force, while utterly consistent, would not be acting in my best interest. This belief is actually correct and for that reason, it is called a ‘rational fear.’ However, my irrational and disproportionate reaction can best be explained by a traumatic event that I experienced a long time ago when I fell from a flying fox (US: zipline) and was severely injured by the landing. There are, of course, also irrational fears, but my point is that a belief, whether conscious or subconscious, always underlies the experience of fear. And that belief has to do with being subject to the power of somebody or something.

Worldly Fear vs. the Fear of God

Seen in that way, fear is not the opposite to faith, but its complement. To fear something or someone means to believe that they are more powerful than us and we are subject to that power. And that is why every fear (except one) is bad. Nothing and no-one is perfectly and consistently good all the time. (Recall that gravity is consistent, though not always, good, at least from the perspective of those who have fallen foul of it). And so, to believe that we are subject to the power of anyone or anything except God, is a vulnerable and scary, and for some, a debilitating place to be.

To be subject to the power of One who is Goodness, and Love personified, and who is able to work all things together for the good of those who love Him, is profoundly positive. Click To Tweet

But God is good. And, what’s more, He is consistently good. He is good— all of the time. So to fear God is a radically different experience than fearing anything else. That is, to fear God is to believe that we are subject to Him and that He may exercise power over us. And to be subject to the power of One who is Goodness, and Love personified, and who is able to work all things together for the good of those who love Him, is profoundly positive. The fear of the Lord is simply having faith in His character—the right belief about who and what He is. That is why I can say that while I fear God, I am not scared of Him.

The fear of the Lord is simply faith in His character—the right belief about who and what He is. That is why I can say that while I fear God, I am not scared of him. Click To Tweet

In order to illustrate this, it is best to think about why it is appropriate to have a reverent fear of God. Simply put, as God, He is able to do things that no-one else can. We should fear Him because He is the only One who can create, and we should fear Him because He is the only one who can save. Interestingly, it is in these two abilities— creating and saving— that God’s motive of love can be most strongly perceived. Why did God create humanity? Because He desired a loving relationship. Why does God go to such great lengths in order to save us? Because He desires to heal that same relationship. Thus, the reasons that we are to fear God, are inseparable from those which demonstrate His perfect love for us. Rather than contradicting the notion that perfect love casts out fear, this adds another dimension. Perhaps we could say that it is the fear of the Lord that casts out all (other) fear.

The reasons that we are to fear God, are inseparable from those which demonstrate His perfect love for us. Click To Tweet

Finding Freedom from Fear in the Fear of God

I will finish soon, but on this last point, I think that the early Christian martyrs have a lot to teach us. One of my favourite subjects to teach at Planetshakers College is the history of Christianity. In the opening lecture of the subject, we look at a number of these martyrs in the persecuted early church. They endured the cruelest torture (something which, if we are honest, most of us fear) without fear. Because they understood that they were subject to God’s power, their tormentors quickly realised that despite what they inflicted on them, they were powerless to change their resolve to confess Christ. This stubborn and fearless resolve led many who witnessed those barbaric events—even the perpetrators—to themselves, profess faith in Christ. A particularly inspiring example is a man named Polycarp— an elderly leader in the church of Smyrna in the 2nd Century. Polycarp was a beloved and influential figure in the Christian community and was therefore the target of Roman persecution. Rather than being threatened when a group of Roman soldiers came to arrest him, he invited them in to have dinner with him. Brought before the proconsul, they demanded that he reject Christ, threatening to set wild animals upon him or burn him to death. Unfazed, he famously replied, “86 years have I have served Him, and He has done me no wrong. How can I blaspheme my King and my Savior?” Polycarp feared the Lord and had a revelation of His goodness. So much so, that he feared nothing that any man could do to him, even until his death.

When we properly fear God, then we are truly free because it is impossible to fear God and to fear anything else at the same time. Click To Tweet

So how can a loving God want us to fear Him? The better questions is, How could a God of love possibly want anything less? If we fear (believe that we are subject to the power of) perfect love, we will never be afraid, because His perfect love drives out every competing (and negative) fear. And that is true freedom.