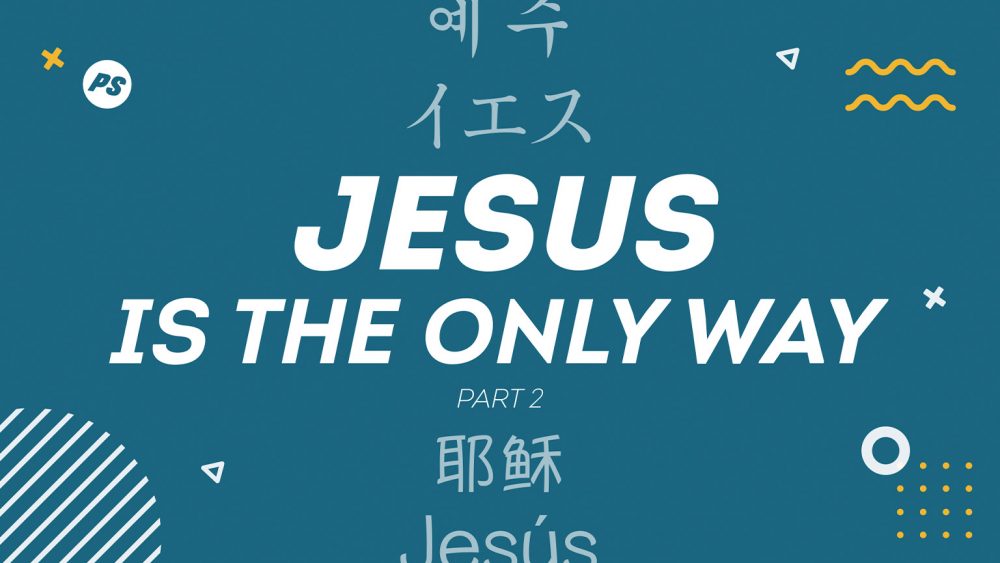 Jesus is the Only Way (Part 2)

This is the pervading question of the postmodern age, but it is not a new question at all. This was, in fact, the very question posed by Pilate at the trial of Jesus, just over 2000 years ago.

Therefore Pilate said to Him, "So You are a king?" Jesus answered, "You say correctly that I am a king. For this purpose I have been born, and for this I have come into the world: to testify to the truth. Everyone who is of the truth listens to My voice." Pilate said to Him, "What is truth?"

In my last post, I began to discuss Jesus’ words “I am the Way, the Truth and the Life. No one comes to the Father except through me.” I started with His first claim: “I am the Way.” In this post, I want to deal with the next claim: “I am…the truth.”

In the last post, I showed that when Jesus said “You know the way to the place where I am going,” the way that He was talking about was Himself, not just the path of life that they would have to travel in following Him. In the same way, when 1 John 2:20 says that “…you have an anointing from the holy One, and all of you know the truth,” it is not only referring to the knowledge of certain facts about God, but about the knowledge of Jesus Himself who is the location and fullest expression of the Truth concerning the Father—the very Truth Himself!

The tragic irony in Pilate’s question—What is truth?—is of course that the answer was staring him in the face. Jesus is not a Truth among many truths, just as He is not merely a Way among many ways. Jesus is not just a teacher who proclaimed truth. Jesus IS the Truth and for that reason, He is the necessary beginning and the end (that is, the goal) of any sincere search for truth. To know Jesus is to know the Truth, and to seek the truth is to seek Him.

To know Jesus is to know the Truth, and to seek the truth is to seek Him. Click To Tweet

It is therefore of the utmost importance to understand exactly who and what Jesus was. The Bible reveals Jesus as both human and divine; the Son of Man and the Son of God. In the words of Peter’s confession, Jesus is “the Christ, the Son of the living God” (see also Martha’s confession in John 11:27), and in Thomas’ words, he is “my master and my God.” The truth that Jesus is both fully human and fully divine has been codified since the early centuries in the language of the creeds (“true God of true God. . .of one substance with the Father. . .who for us all and for our salvation. . .was made man”).

Don’t you know me, Phillip, even after I have been among you such a long time? Anyone who has seen me has seen the Father. How can you say, ‘Show us the Father’? Don’t you believe that I am in the Father, and that the Father is in me? The words I say to you are not just my own. Rather, it is the Father, living in me, who is doing his work

On the other hand, Jesus is the truth about us. Jesus did not only come to represent God to us, but also to represent us to God. In Jesus we do not only see what God is like, we see what true humanity is like. Reading a Theology text recently, I was challenged by the thought that we all too often devalue the image of God in humanity. We say for example, when speaking of a fault or a failure in somebody’s character, “Well, he’s only human after all.” What we should say instead is “in that area at least, he is less than human.”

The Bible tells us that humans were created in a way that was ‘very good’—in God’s image and likeness—but that we fell through sin. In the process, we become something less than God’s original intent. Less than human. Jesus came to reveal the Father, but He also came to restore humanity to the Father’s original intent—to be the ‘image bearers’ of God who rule the planet on His behalf. The truth about Jesus is that He is fully human in a way that we ourselves can never be, unless we find our identity in Him.

Then you will know the truth and the truth will set you free...

In order to truly know Jesus, it is important to believe and confess rightly about Him (the theological term for this correct belief and confession is orthodoxy). Jesus Himself said that true worshippers must worship the Father in spirit and in truth. That is to say, we do not worship God truly unless we believe and confess Him as He truly is. But this is only the start. To worship the Father in truth does not only mean worshipping Him truly, but worshipping Him out of our true identity in Christ— that is— in Truth. Because it is only in Christ that the Father becomes our Father. The goal is to know Jesus—not just to know about Him, but to know Him personally in order to know Him truly.

My conviction is that what we believe about God (theology) determines how we live our lives. I pray you would know, fully experience and enter into the truth of Jesus— the one who is Truth, the one who reveals his Father to us, the one who shows us what it is to be fully human and the one who invites us, in Him, to call His father our Father.