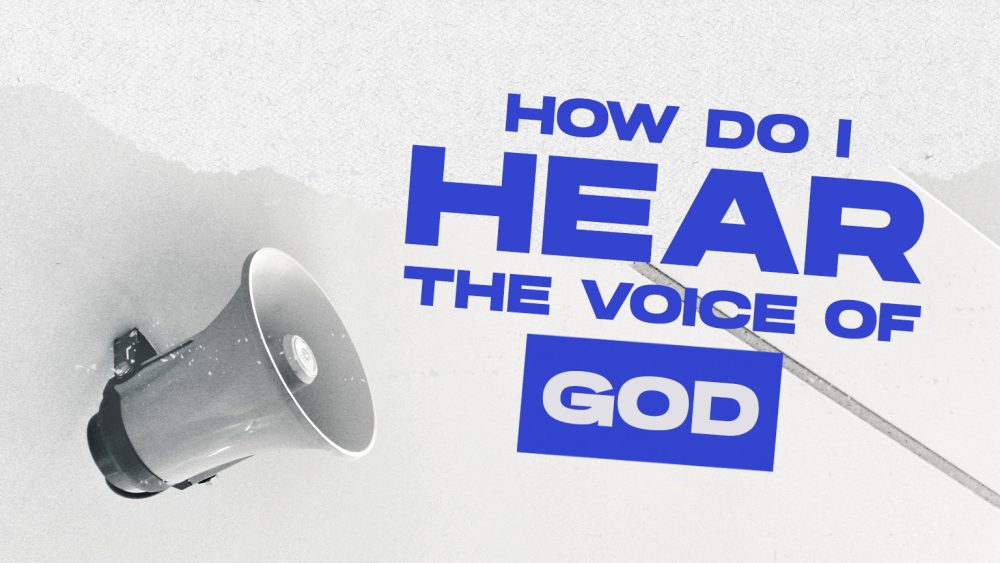 The God that we serve as Christians, is not absent and does not desire to be separated from us.

At the heart of the Gospel, lies a story of One who would go to the greatest lengths to restore His relationship with humanity. Our God is not silent. No, He speaks. Any good relationship requires good communication. It is natural then, for God’s children to have a desire for hearing God’s voice.

In John 10:27 (NIV) , Jesus said, “My sheep listen to my voice; I know them, and they follow me.” Thankfully, God has made sure that hearing His voice is not just reserved for “super-spiritual” Christians or the upper levels of a church’s hierarchy. Nowhere is this truth more evident than in His Word.

God has made sure that hearing His voice is not just reserved for "super-spiritual" Christians or the upper levels of a church’s hierarchy. Nowhere is this truth more evident than in His Word. Click To Tweet

When discussing the voice of God, it is prudent to first talk about the Bible. The Bible is the inspired Word of God that has been recorded for humanity (2 Timothy 3:16). Every now and then, one of the Planetshakers Bible College students will tell me that they are struggling to hear God's voice. My first response is almost always, “Have you been reading your Bible regularly?”

I ask this question for a number of reasons. First, as we have already stated, the Bible IS the Word (voice) of God. It is His Word for all humanity, yes, but it is also His message for you personally. Secondly, reading God’s Word helps us to become familiar with His voice so that when He does speak, we are able to recognise that it is Him who is speaking. Finally, the more we know God’s Word, the more effectively we will be able to test the messages that we are hearing. This is discernment.

We shall discuss each of these points in more detail as we continue, but it will suffice to say that the first step in hearing the voice of God is regularly reading the Word of God.

I first learned of a philosophy that flourished during the 18th Century called ‘Deism’, in my early studies of church history. In short, deists believed in a god who created the universe but then left it to its own devices. This ‘set-and-forget’ god in whom they believed, is not the Christian God of the Bible. Rather, we serve a God who inspired the writings of the Bible in order to guide us every step of the way and clearly communicate His divine plan. Unlike the god of Deism, the God of the Bible desires relationship, and relationship requires communication. For this reason, God is active in our lives today, speaking constantly to us.

The God of the Bible desires relationship, and relationship requires communication. For this reason, God is active in our lives today, speaking constantly to us. Click To Tweet

Perhaps this is most evident in the active role of the Holy Spirit in the lives of all Christians. In the gospels, Jesus promises that He will send the Holy Spirit, or Paraclete (John 14:16). Although difficult to translate, we can understand the Paraclete as the One who comes alongside us in order to comfort, encourage, convict and coach. Holy Spirit often speaks to us in promptings and impressions on our hearts, encouraging us through trials, coaching us through challenges and prompting us to share the good news of the Gospel with others.

Many testify that God has given them ‘pictures’ (in their imagination), while others report hearing Him speak to them audibly. My experience is that God generally speaks to me through impressions on my heart. In my time as a university student, I lived in a regional area and spent a good portion of my life on trains. God would often prompt me to speak to other people during my commute, challenging me with simple suggestions like, “Speak to that person” or “Pray for him”. Admittedly, there were often occasions when I sheepishly avoided God’s prompting, however, there were other instances where I found the courage to have fruitful conversations— talking to people I had never met before about Jesus, and even on a few occasions, giving them a Bible.

In addition to these kinds of promptings, most Christians can testify of a moment when the Holy Spirit comforted them during a difficult period of their life, or convicted them when they were about to do something harmful or careless. These are examples of God still speaking today.

Discerning the Voice of God

Having established that God still speaks today, we naturally come to two questions:

This is where discerning the voice of God becomes very important. As a youth leader, my wife had to deal with two struggles with young Christians who were learning to hear God’s voice. Some of the teenagers she was discipling were so unsure about whether they were hearing from God that they were not confident enough to act. Others apparently struggled to differentiate between God’s voice and their own emotions, and would act impulsively without first testing what they had heard. Both are issues that can be overcome with good discernment.

The first thing I ask myself is whether the voice I am hearing is in line with God’s Word or not. This is why regular Bible reading is vital. When we read the Bible regularly, we become familiar with God’s voice. Earlier this year I was walking through a busy shopping center when I heard a nearby voice say “Hey bro!” At this point I had not seen their face and had no way to gauge whether they were even speaking to me. However, even with just these two words, I instantly knew that the person speaking was my close friend Chris. Chris and I had known each other a long time, served regularly at church together and he had been the best man at my wedding. Even in a crowd I could recognise his voice because I had become so familiar with it. It is the same way with God. The more we read His Word, the easier it will become to recognise His voice.

The more we read God’s Word, the easier it becomes to recognise His voice. Click To Tweet

On the other end of the spectrum, some voices line up more with our emotions than they do with the Word of God. This is often evident when some Christians declare that God is leading them to go in a certain direction one month, then in a completely different direction the next. God, they say, has called them to a particular church, but after a short amount of time, He suddenly calls them to another. This type of ‘pot-plant’ Christianity is perhaps a sign that someone is being led more by their own emotions, than the voice of God. By contrast, the voice of God often challenges us and prompts us to act, despite the emotions we are feeling, and encourages us when we don’t feel qualified or confident. His voice always implores us to do that which exalts Christ and builds His church.

Peter has these wise words to share about respecting authority and operating in humility:

In the same way, you who are younger, submit yourselves to your elders. All of you, clothe yourselves with humility toward one another, because, ‘God opposes the proud but shows favour to the humble.’

This advice is particularly applicable when we believe that we have heard something from God. It is always prudent to consult with a mature Christian— someone you trust in leadership. While no leader is perfect, they can offer a fresh perspective and help guide you as you begin to hear God’s voice. Even as someone involved in leadership myself, there are still ministry peers and leaders in my life whom I regularly consult in this manner. As the proverb says,

The question that still remains, however, is “How do you hear God?” What things can we practically do to hear God’s voice?

We will finish by looking at four simple strategies:

This point cannot be emphasised enough! Reading God’s Word IS hearing His voice. The more we read His Word, the more familiar we will become with His voice, and the better we know the Bible, the better our discernment will be.

2. Get rid of other distractions

In 1 Kings 19:11-12 , God speaks to Elijah in a “still, small voice.” We have the tendency as humans to become so busy and build up so many distractions that we may not even hear God, even if He was to speak to us. It would be like trying to keep in contact with a close friend, but you are so busy, stressed and distracted that you never have time to talk to them. I often like to get into a quiet place free from distractions and simply focus on God, giving myself an opportunity to hear what He is saying.

All too often we make prayer our ‘to-do list’ for God. The truth is, it is far better for prayer to be a two-way street, allowing opportunities for God to speak to us and give us guidance as we listen to His voice.

All too often we make prayer our ‘to-do list’ for God. The truth is, it is far better for prayer to be a two-way street, allowing opportunities for God to speak to us and give us guidance. Click To Tweet

Teaching His disciples about prayer, Jesus used an amazing image of fatherhood:

“Which of you fathers, if your son asks for a fish, will give him a snake instead? Or if he asks for an egg, will give him a scorpion? If you then, though you are evil, know how to give good gifts to your children, how much more will your Father in heaven give the Holy Spirit to those who ask him!”

Wanting to accurately hear God’s voice and guidance is a good thing that is in accordance with His will. This is perhaps the simplest step of all: Pray a simple prayer, asking God to speak and to help you hear/discern His voice.