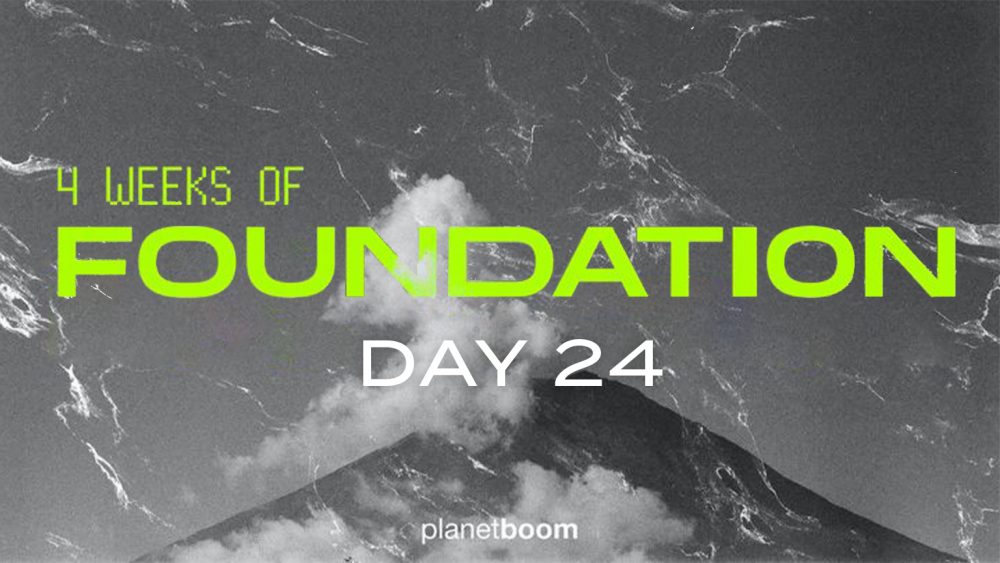 So we're the Church, the 'called-out,' ones and we're growing together to become more & more like Jesus. But if we're going to keep growing together, then we're gonna need to make the decision to stick together! This is going to mean really loving each other with God's love. This is sometimes easier said than done, because none of us are perfect yet. You're on a journey and so am I. And so is everyone else in this family. This means that people in the church might still hurt us. There will be disagreements and misunderstandings, and if we don't decide to stick together in unity, those things can isolate us and be used as weapons of the enemy to derail us. This is why we need to decide in our heart that this is more than just convenience! This is a 'no matter what' commitment to the family through thick and thin. This is also where we need build a habit of letting the Holy Spirit check our hearts. Are we holding onto any unforgiveness or offense in our heart toward others, or have we been hurt or disappointed by people? The Holy Spirit will always help us deal with those things so that we won't be held back in any way. The Bible has some really clear things to say about all this. Let these things become principles that you live by, and let God speak to your heart today as you read these scriptures.

“If another believer sins against you, go privately and point out the offense. If the other person listens and confesses it, you have won that person back. But if you are unsuccessful, take one or two others with you and go back again, so that everything you say may be confirmed by two or three witnesses. If the person still refuses to listen, take your case to the church. Then if he or she won’t accept the church’s decision, treat that person as a pagan or a corrupt tax collector. “I tell you the truth, whatever you forbid on earth will be forbidden in heaven, and whatever you permit on earth will be permitted in heaven. “I also tell you this: If two of you agree here on earth concerning anything you ask, my Father in heaven will do it for you. For where two or three gather together as my followers, I am there among them.” Then Peter came to him and asked, “Lord, how often should I forgive someone who sins against me? Seven times?” “No, not seven times,” Jesus replied, “but seventy times seven! “Therefore, the Kingdom of Heaven can be compared to a king who decided to bring his accounts up to date with servants who had borrowed money from him. In the process, one of his debtors was brought in who owed him millions of dollars. He couldn’t pay, so his master ordered that he be sold—along with his wife, his children, and everything he owned—to pay the debt. “But the man fell down before his master and begged him, ‘Please, be patient with me, and I will pay it all.’ Then his master was filled with pity for him, and he released him and forgave his debt. “But when the man left the king, he went to a fellow servant who owed him a few thousand dollars. He grabbed him by the throat and demanded instant payment. “His fellow servant fell down before him and begged for a little more time. ‘Be patient with me, and I will pay it,’ he pleaded. But his creditor wouldn’t wait. He had the man arrested and put in prison until the debt could be paid in full. “When some of the other servants saw this, they were very upset. They went to the king and told him everything that had happened. Then the king called in the man he had forgiven and said, ‘You evil servant! I forgave you that tremendous debt because you pleaded with me. Shouldn’t you have mercy on your fellow servant, just as I had mercy on you?’ Then the angry king sent the man to prison to be tortured until he had paid his entire debt. “That’s what my heavenly Father will do to you if you refuse to forgive your brothers and sisters from your heart.”

Finally, all of you should be of one mind. Sympathize with each other. Love each other as brothers and sisters. Be tenderhearted, and keep a humble attitude. Don’t repay evil for evil. Don’t retaliate with insults when people insult you. Instead, pay them back with a blessing. That is what God has called you to do, and he will grant you his blessing. For the Scriptures say, “If you want to enjoy life and see many happy days, keep your tongue from speaking evil and your lips from telling lies. Turn away from evil and do good. Search for peace, and work to maintain it. The eyes of the LORD watch over those who do right, and his ears are open to their prayers. But the LORD turns his face against those who do evil.”

We love each other because he loved us first. If someone says, “I love God,” but hates a fellow believer, that person is a liar; for if we don’t love people we can see, how can we love God, whom we cannot see? And he has given us this command: Those who love God must also love their fellow believers.